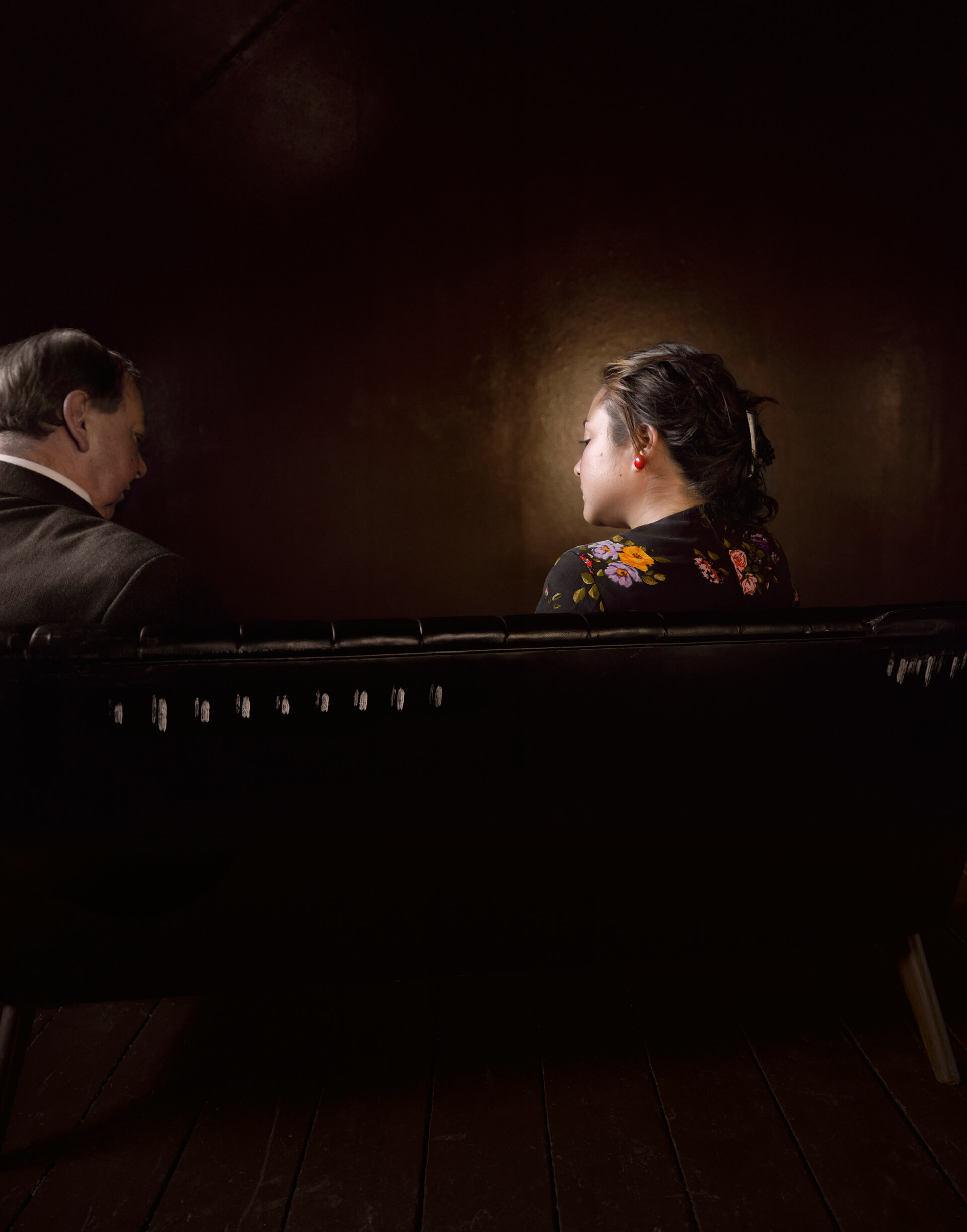 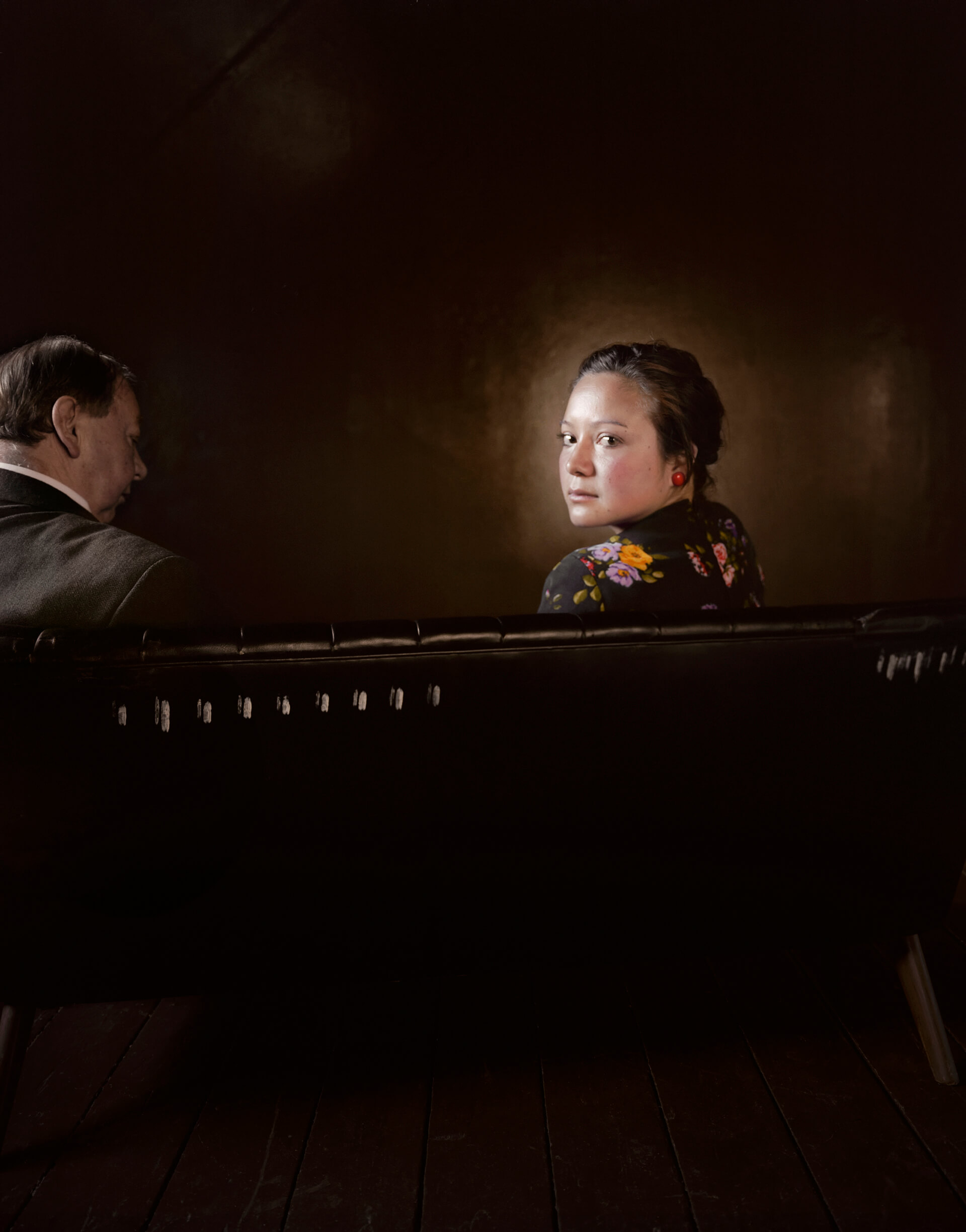 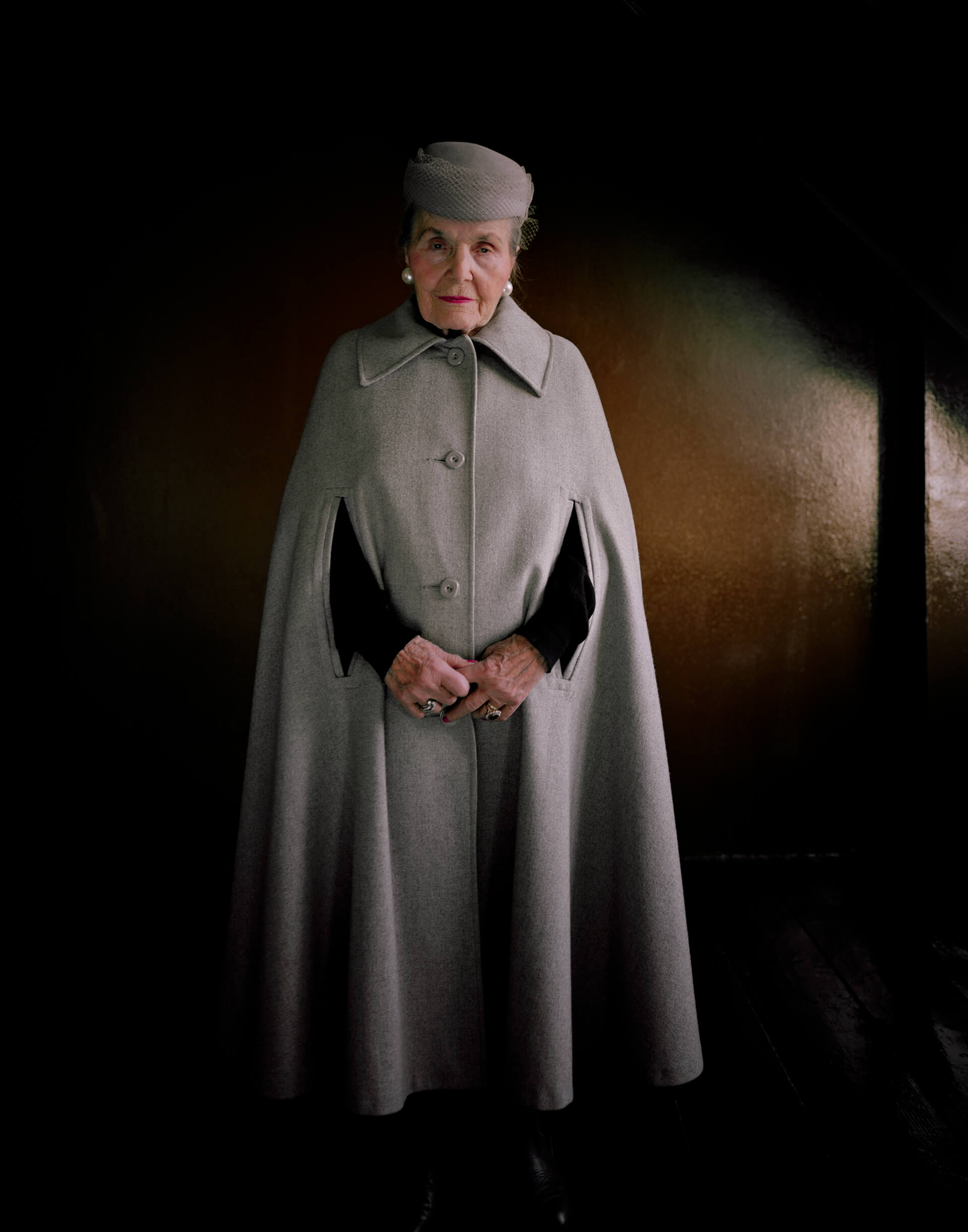 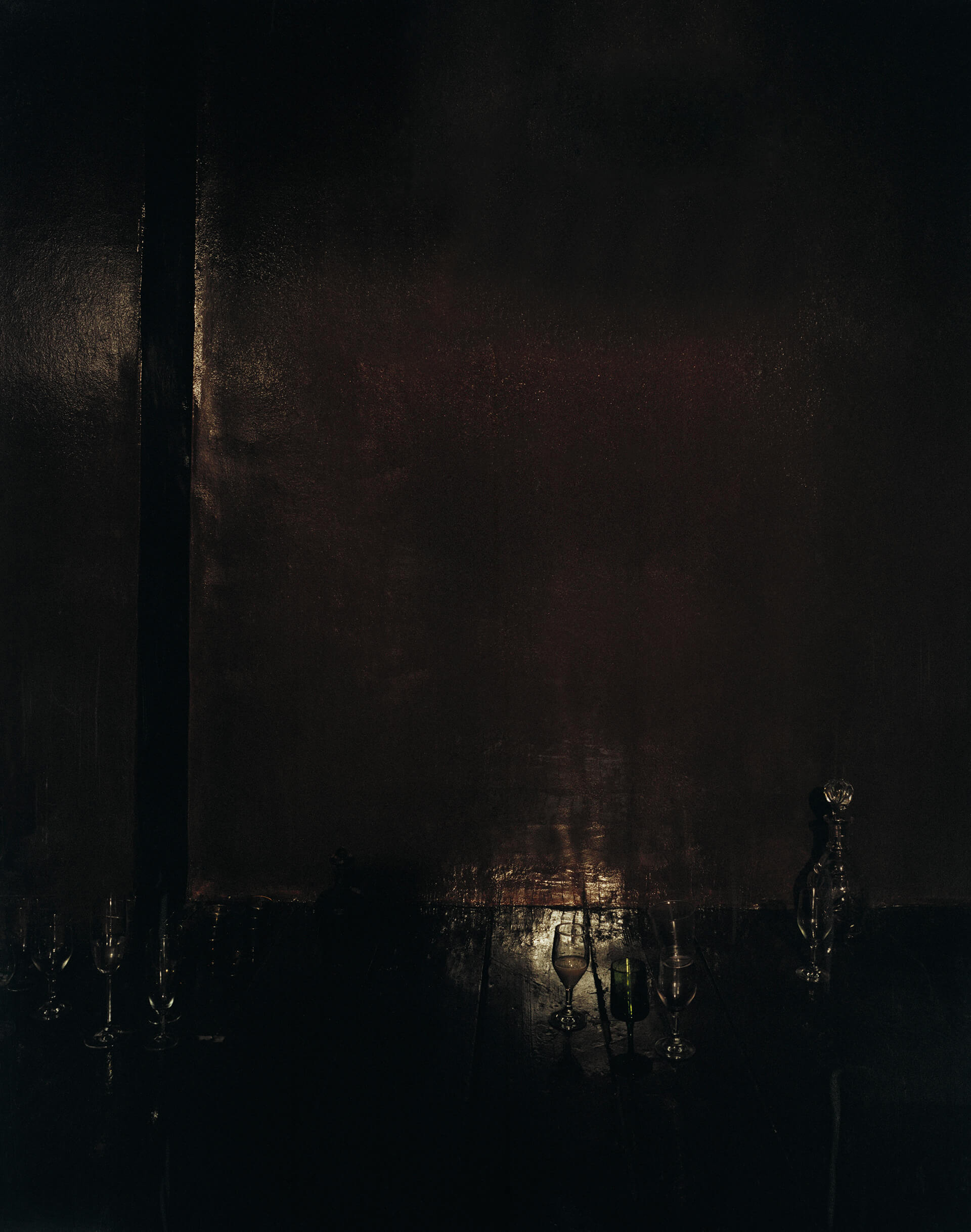 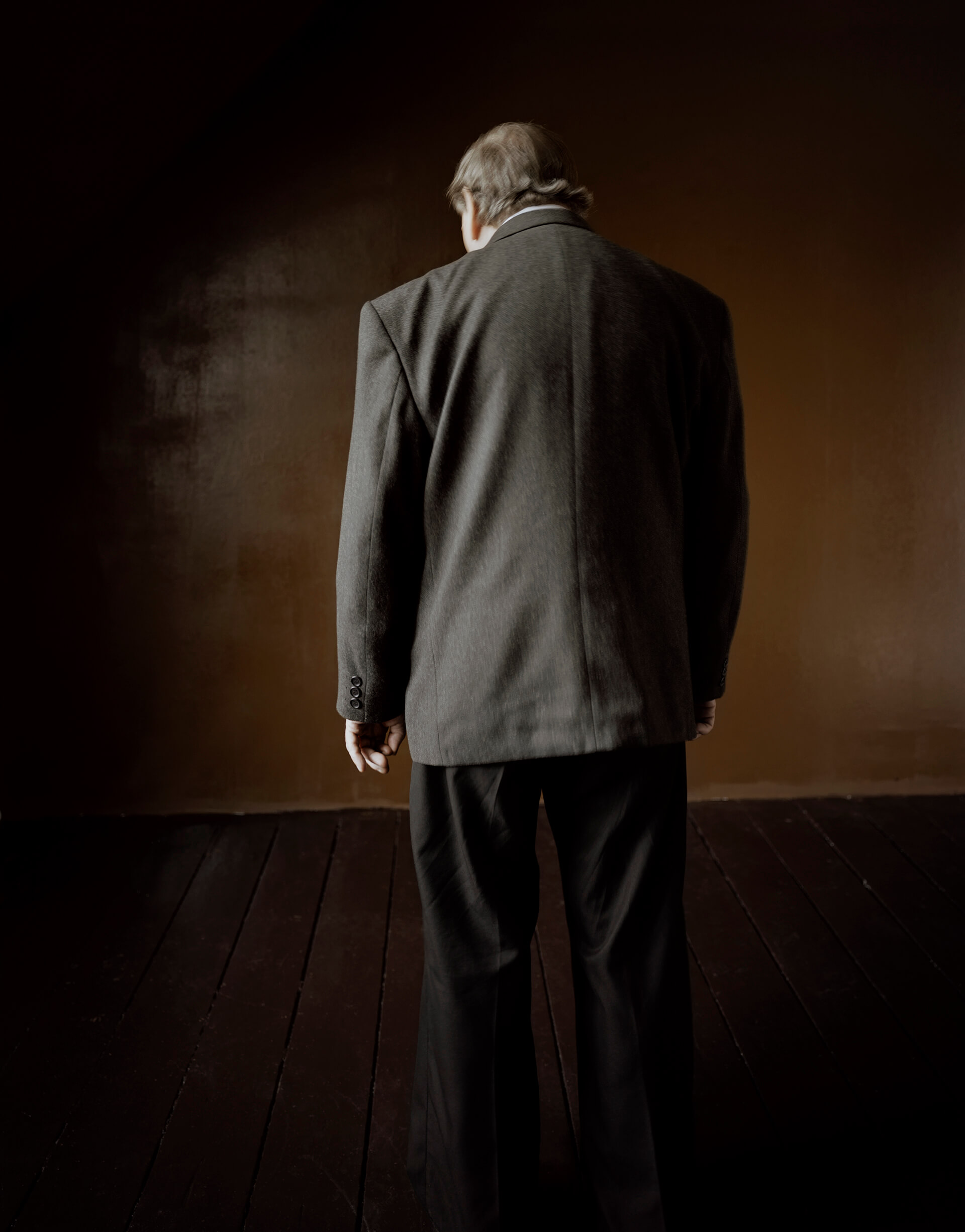 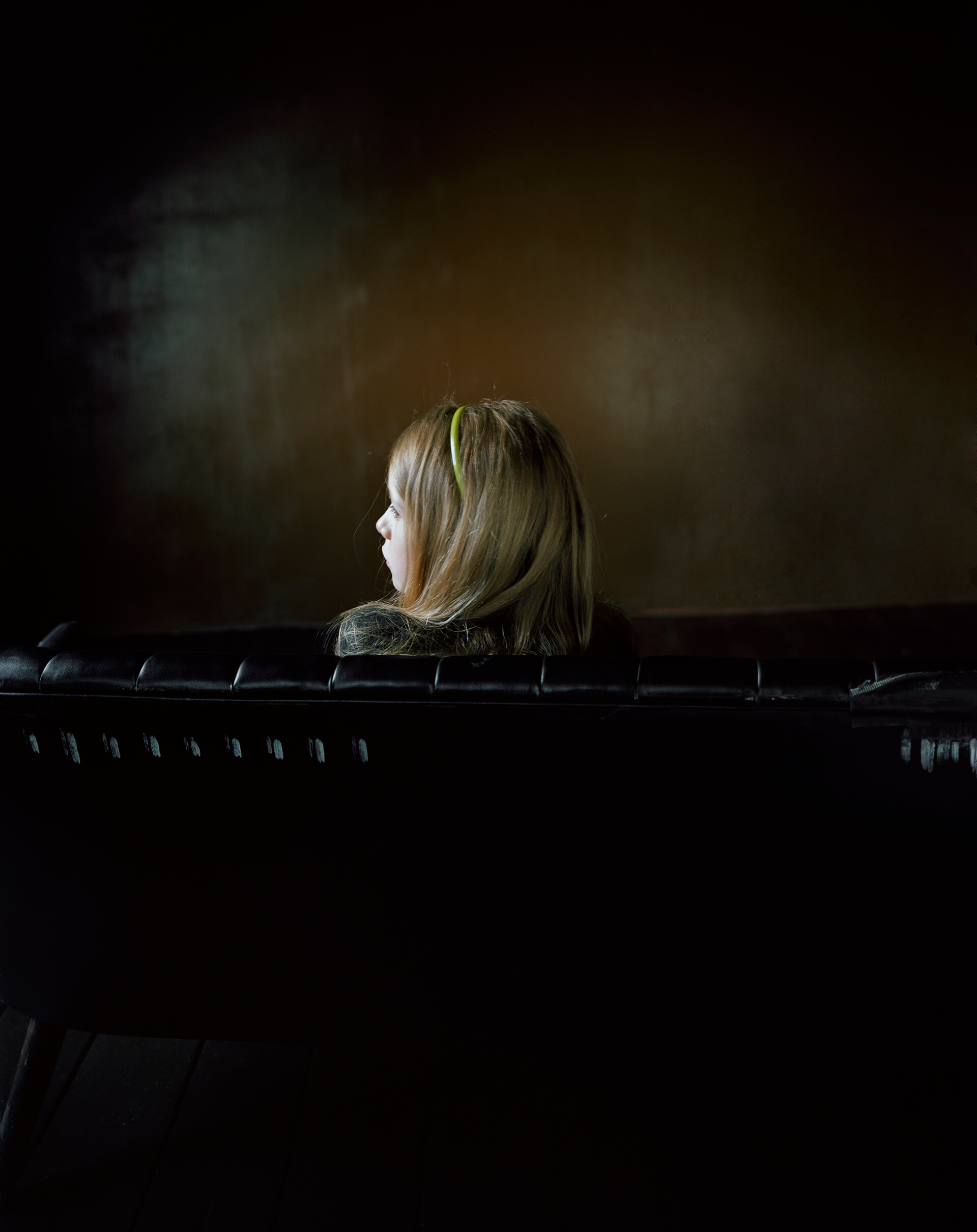 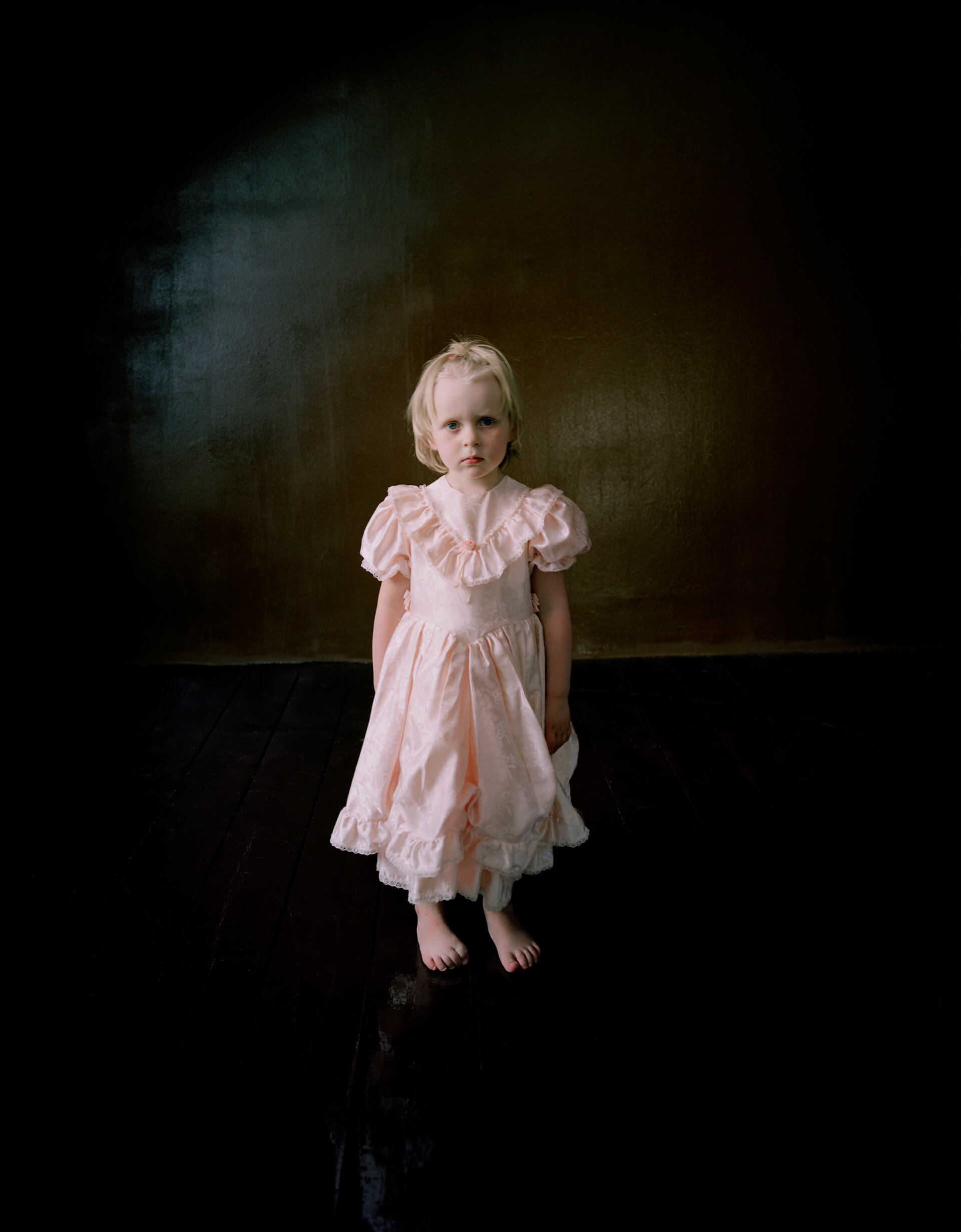 It is the oscillation between temporal levels as much as between different genres that makes Danish artist Pernille Koldbech Fich’s photographic portrait series ‘Introducing Viola’ so outstanding and able both to fascinate and disturb the observer in equal measure.

The people portrayed in ‘Introducing Viola’ seem at once both mysteriously familiar and alien; on the one hand they appear to originate in the 21st century and yet on the other to come from another time.

Pensive and preoccupied, often turned towards the observer, they stand or sit in front of timeless dark, lustrous walls which remind one of the backdrops of historical painted portraits; surrounded by melancholic, poetic stillness and a mysterious aloofness. In his 1980 essay published in Paris Camera Lucida: Reflections on Photography Roland Barthes wrote: “The first person to see the first photograph must have believed it was a painting: the same layout, the same perspectives. Photography has been and always will be haunted by the spectre of painting; by copying it or calling it into question it has made painting into the Absolute, the authoritative father-figure, as though it has arisen out of painting.”

Concerning the history of portrait photography one can declare that its earliest attempts do in fact recall painting. This may be explained by the fact that, among other things, to begin with, photography required relatively long exposure times. Immobility was therefore a critical criterion for the success of the photographic subject and sometimes had to be enforced.

For this reason, the people portrayed were in the most part photographed using a particular device, the so-called fixed position system. The positions in which people were finally photographed were therefore not only determined by convention and the photographers, but also by the fixed position. The resulting immobility as well as the patterns of representation, often taken from painting, in which people were photographed in these early portraits could well be at the root of the impression of a historical stillness and at the same time evoke the timelessness and increased significance of the genre of painting.

In her series ‘Introducing Viola’, Koldbech Fich picks up precisely this painting aesthetic and enhances it using colour, surface texture and lighting atmospherics of the spaces she uses.

In this way the artist creates a timeless framework for her portraits, which places itself over the people portrayed like a fine veil, lending them a somewhat universal and eternal quality. This seemingly timeless frame is however contradicted by the artist’s conscious creation of a narrative which opens up the still scenes into a supposed story and, with it, an exciting divergence between a timelessness inherent to painting and a time-bound sequence created by the filmic narrative.

In fact the depicted people appear to stand in mysterious, inexplicable relations to each other. The concept of the series, which Koldbech Fich chooses here, as well as the already-mentioned spaces with which she creates a unifying element between the individual images, are the first important design element to give an impression of narration to the photographs.

In this connection, the picture with the title Bed and Breakfast #1 has a particular importance. Conceived as a still-life, it shows only a collection of empty glasses and decanters on dark wooden floor, and this too is against monochrome, brown-painted, light-reflecting walls, and the suggestive remains of a party or gathering. Alongside the enhanced association with painting here evoked, it is precisely this photograph, which refers to an action that took place before the portrait was taken and thereby to a concrete temporal framework, that creates a kind of imagined narrative link between the portraits.

The resulting expectation of a linear narrative strand will however be frustrated – the supposed story remains diffuse and intangible. To make her observations Kolbech Fich takes up a deliberately distant position through which people appear far away and impenetrable. The viewer on the one hand takes part in the imagined story, but remains ultimately excluded. Pictures that would aid in the comprehension of the narrative meaning, and which could put these portraits into a clear meaningful connection with each other, remain absent. Yet it is precisely this, which opens up a space for association that reaches from the implied history of painting and photography up to the medium of film.

Their decoding throws the viewer on himself, leaves him to his own. By this time it is clear that Koldbech Fich is not interested in the pure, classical portrait. The focus is not on the depiction of a person in a manner as authentic and realistic as possible, but rather the creation of an oscillation between reality and fiction, between the actual person portrayed and a diffuse semi-fiction, something which resonates throughout all the photos without ever being clearly tangible.

It is this compelling atmosphere created between the past and the present, reality and fiction, created from the association-rich mix between photography, painting and film, which permeates the perception of this large-format photographs and remains in our memory long after as mysterious, enigmatic, poetic and still.

In this confident game with the affinity to painting on the one hand and the genre of film on the other, Koldbech Fich’s photography can be considered against the background of artistic photography’s significant transformation, achieved in the last few decades, namely the possibility today of playful and free references to other media and genres without the need for photography to have to assert itself as an artistic medium.

– Hoffmann, Felix: Das Selbst als ein Anderer – Die Pose im Blick der Fotografie. In: “Was ich von ihnen gesehen und was man mir von ihnen erzählt hatte” – Der fotografierte Mensch in Bildern der fotografischen Sammlung im Museum Folkwang. (The Self as Other – The Pose in Photography’s Gaze. In: “What I’ve seen of them and what I was told about them” – The photographed person in photos from the photographic collection in the Folkwang Museum.) Published by: Museum Folkwang, Essen; Steidl Verlag, Göttingen 2003, S. 10/11